Stop the Bans: Diversity and Inclusion in Public Policy

Oklahoma House Bill No. 1775, the controversial state legislation that bans the teaching of critical race theory in Oklahoma schools, has been signed into law by Governor Kevin Stitt at the beginning of May 2021. This bill bans certain topics regarding race and gender from being taught in public colleges and universities in the state. Notwithstanding my personal anger at this act of ignorance, in this post I want to argue that this action is part of a wider international fascist current that aims to eradicate the diversity and inclusion requirement in academic curricula in order to reinforce nationalist agendas and to privilege a handful of (white and male) people in power.

A pattern of comparable bans swept Europe in 2018. Hungarian Prime Minister Viktor Orban banned gender studies programs from being accredited at universities, indicating that, “[t]he Government’s standpoint is that people are born either male or female, and we do not consider it acceptable for us to talk about socially-constructed genders, rather than biological sexes.” A similar attitude spread across Italy when far-right politicians reacted to a survey sent out to students aiming to determine the types of peer bullying faced by young people in terms of their race, sexual orientation, or gender. Both conservative political figures and media defined this survey as “gender indoctrination.” A UNESCO proposal on gender equality in schooling was banned by the Education Ministry in Bulgaria, deeming the project investigators as “’gender agents’ endangering Bulgarian children.” In Romania, “Coaliția pentru Familie” (i.e. Coalition for  Families) initiated a referendum meant to redefine the Constitutional term “family” to refer solely to the union between “a man and a woman.”

Here is how writer for the Atlantic, Eliza Epperly interprets these bans: “For the far right, propping up male authority and promoting a nuclear family that sticks to the gender binary are central tenets of the broader nationalist project. By contrast, gender studies promotes a more fluid understanding of self and society, in particular by recognizing gender as something shaped and interpreted by a given social order, as opposed to an immutable biological fact.”

For those who are curious, here’s what gender means: The World Health Organization explains that gender refers to characteristics of people that are socially constructed. Norms, behaviors, and roles associated with being a woman, for example, constitute such social constructs. While gender interacts with sex (as in chromosomes and not intercourse), it is different from it. Sex refers to a person’s biological and physiological characteristics, including chromosomes, hormones, and reproductive organs.

Although the Oklahoma House Bill No. 1775 does not specifically restrict complex or fluid definitions of gender in the classroom (notice that the word used is “sex”), it utilizes an agenda echoing other similar efforts of implementing a broader nationalist project by eliminating diversity and inclusion discussions of any kind.

The text of the bill reads: 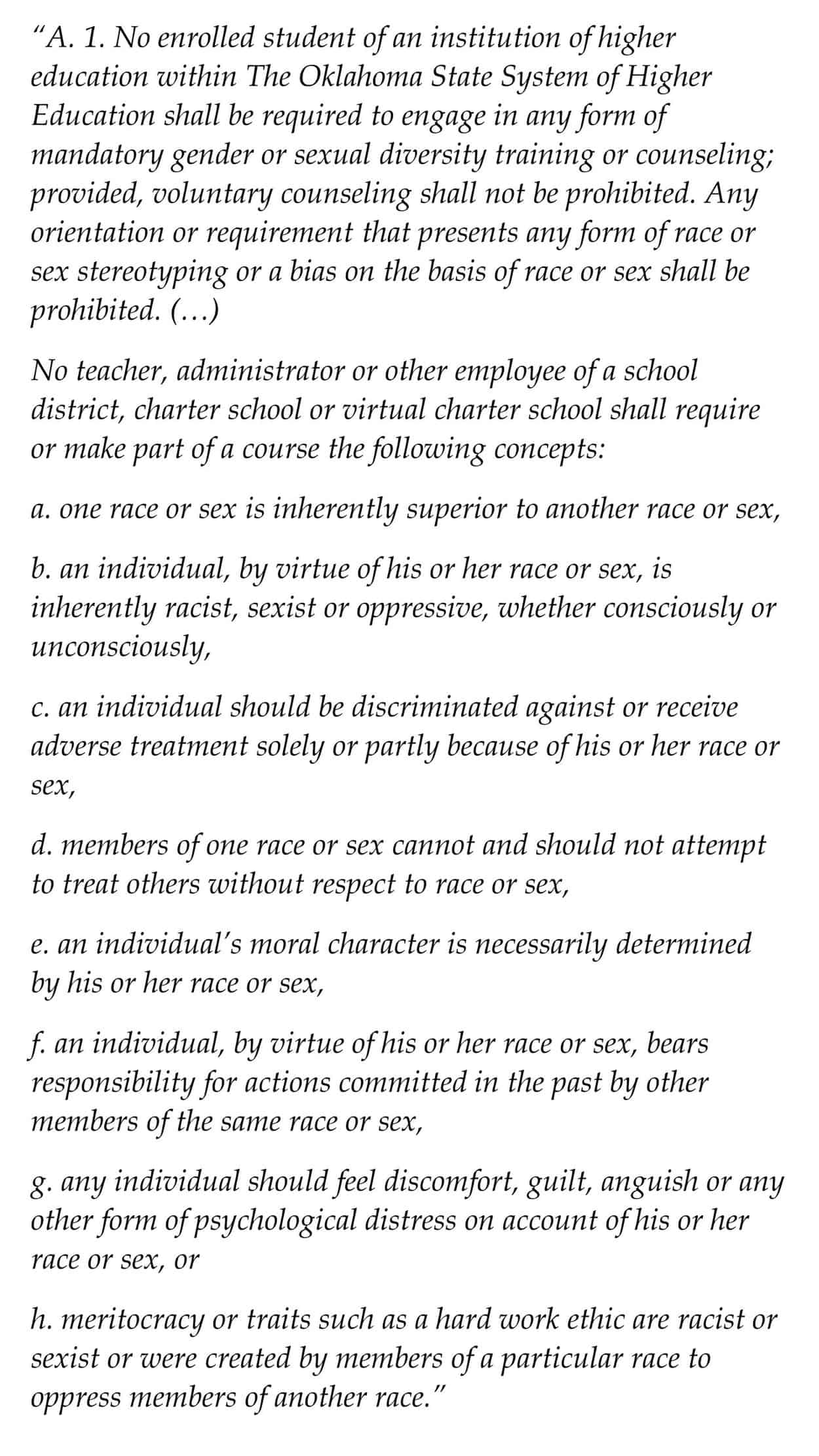 Although the language mimics the discourse of liberal egalitarian theories of justice, by using syntactical and semantic imprecision—with which some of us Romanians in the US are very familiar given our communist past—it attempts to render equal rights as a historical timeless construct in a society profoundly troubled by issues of inequity and inequality. The bill paragraphs cited above seek to comfort those whose identity may be construed as steeped in layers of unearned and unacknowledged privilege. To put it simply, the bill cushions “white fragility,” a term coined by Robin DiAngelo to refer to the defensiveness of white people when their ideas about race and racism are challenged.

So why do we need diversity and inclusion in schools and in public policy? Because the scope of public education defines the nature of citizenship. However, if American citizenship is to be predicated on principles of equality to include individuals with different religions, cultures, languages, racial, sexual, and gender identities, without some being subordinate to others, then how do we do that? How do we write equality, equity, diversity, and inclusion in public policy?